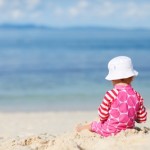 Every time we go outdoors, we’re exposed to Ultraviolet (UV) rays and the repeated exposure builds over time. The delicate skin of babies and toddlers is particularly susceptible to sunburn and UV damage.

According to Dr. Ramzi W. Saad, Board Certified dermatologist and partner at South Shore Skin Center and Spa, “UV damage can happen at any age, but it begins to occur during childhood. The more frequent the exposure to Ultraviolet A (UVA) and Ultraviolet B (UVB) rays without protection, the greater the risk of developing melanoma or skin cancer as an adult. Parents and caregivers are responsible for protecting the very young, so knowing HOW to best protect them is key.”

The dermatologists at South Shore Skin Center and Spa provide the following expert advice to parents and caregivers for protecting the skin of very young children from harmful UVA/UVB rays from the sun (which are present even on cloudy days):

1. Apply a chemical-free sunscreen containing an SPF 30 or higher. Sunscreen may be applied to babies older than six months and toddlers. Look for products that are chemical free and have 10 percent micronized Zinc Oxide such as Blue Lizard Australian Sunscreen Baby SPF 30+ or Solbar Shield SPF 40.

2. Dress young children in sun protective clothing. Covering up the skin with clothing is one of the most effective ways of protecting the sensitive skin of babies and toddlers. Sun hats with wide brims and flaps to shade ears and neck, lightweight long sleeved shirts, sun rompers and swim bodysuits provide good coverage. Brands such as Coolibar offer 50+ UPF (Ultraviolet Protection Factor) clothing. Other sun protective clothing brands may be found online or at retailer REI.

3. Sunglasses help protect the delicate eye area. Skin cancer can develop anywhere on the body, including eyelids. Because sunscreen cannot be applied on or around the eyes, it’s important to shield the eye area from UV rays. For young children, opt for rubber or flexible frames and shatterproof lenses. To ensure that lenses provide UVA/UVB protection, look for the statement “100% UVA/UVB protection” label on the lense when making your purchase.

4. Seek shade. Shady areas not only offer some cool relief on a hot summer day, but some protection from UV rays.

Dr. Saad continued, “As children become more independent, parents and caregivers have a greater challenge of ensuring their tweens and teens wear sunscreen every day, seek shade and wear protective clothing. That is one reason why it is imperative that children learn ‘sun safe’ habits at a very young age because they will have a better understanding of the importance of protecting their skin as they grow older.”

Melanoma is the most common cancer in young white women ages 25-29 and second only to breast cancer in women ages 30-34. New England has the highest concentration of melanoma cases in the United States.

“It cannot be stressed enough that one of the key ways to minimize melanoma mortality is to protect the skin from UVA and UVB rays, starting in early childhood,” noted Dr. Saad.

Founded in 1984, South Shore Skin Center and Spa is a unique team of physicians, physician assistants, nurses, medical assistants, surgical assistants, and licensed estheticians who are all specialists in dermatology and share a passion for excellence and a commitment to providing the highest level of care to both children and adults in the greater Boston area. In addition to the medical dermatology office and Mohs Surgical Unit for skin cancer, South Shore Skin Center and Spa offers cosmetic dermatology treatments for wrinkles, age spots, acne scarring, birthmarks, hair removal, tattoos and more using the Fraxel re:store DUAL and Fraxel re:pair lasers, DEKA SmartXide DOT, Candela VBeam, Gentlelase, Gentle YAG, and Alex lasers. The practice also offers a full range of affordable anti-aging services including Botox, Restylane, Perlane, Juvederm and other wrinkle fillers; volumizers such as Radiesse and Sculptra; microdermabrasion; medical grade facials, micropeels and chemical peels.

END_OF_DOCUMENT_TOKEN_TO_BE_REPLACED

Boot Camp for New Dads (http://www.bcnd.org), a non-profit orientation program for fathers-to-be, operating in more than 260 hospitals, clinics, schools, fire stations and churches around North America and internationally, has worked with hundreds of thousands of dads over the past 19 years. One of the most important concepts they teach new dads is how to provide a safe environment and keep the baby safe. The holidays are busy and it’s more challenging than ever to keep the baby away from choking hazards and other dangers.

Greg Bishop, founder of Boot Camp for New Dads and author of two fatherhood books, shares tips from his second book, Crash Course for New Dads – Tools, Checklists and Cheat-Sheets for keeping your baby safe around the holidays:

Toxins. Sprucing up the house before the holidays? Giving yourself a manicure before heading out to that holiday party? Paints and lacquers, even nail polish and remover should not be used in the vicinity of your baby. A newborn’s immune system is not fully developed, and these substances can be harmful even in small doses.

Smoking. Though you and your spouse may not smoke, visiting relatives may not have a problem with lighting up around your baby. Unlike you, your baby can’t move out of harm’s way. Ask visiting smokers to take it outside or to the garage, far away from your baby’s lungs.

Pockets. It’s always merry with a houseful of family and friends at the holidays. But, with so many people moving around; sitting down and standing up – be aware that things can fall out of your guests’ pockets without anyone noticing. You’re may grab hold of a small item and have it in her mouth before you know it. Even swallowing a single penny might require your baby to go through surgery. Stay aware and don’t be afraid to ask your guests to empty their pockets before holding your baby.

Salt and Honey. Though you know the rules about not feeding salt and honey to your baby; family and friends may not. Although you can’t keep sodium out of your baby’s food, excess salt is detrimental to his kidneys and blood pressure. And, up until your baby turns one year old, babies should NEVER be fed honey. Honey can cause infant botulism, which could lead to death. Be sure that well-meaning relatives who may not be aware of the rules don’t allow your baby to sample even a bite of holiday cuisine without checking with you first.

Decorations. Holiday decorations are a feast for the eyes. Unfortunately, they are also a choking hazard to babies and toddlers who may find small pieces and put them in their mouths. When decorating your home, use the “slide-and-hide” technique. Take a toilet-paper tube and use it as a measuring device. If an object can slide down the tube, it can also slide down your baby’s breathing passage. Put those decorations that don’t pass this test away until your baby is much older. And, of course keep a watchful eye on your baby when visiting relatives or friends with older children who may have decorations and small toys around their home.

About the Boot Camp for New Dads Program

Boot Camp for New Dads has worked with more than 200,000 new dads at their workshops held over the past 19 years. After attending a Boot Camp for New Dads “hands on” educational workshop, dads-to-be are better equipped to face the challenges and opportunities of fatherhood. Men attend the class when they are expecting their first baby, and are joined in the workshop by “veterans” who had previously attended and have returned with their two to four-month-old baby in tow. They are able to give the dads-to-be a realistic idea of what to do and what to expect when their first baby comes. For many men attending, it’s their first time holding a baby.

With more than 4.1 million births (National Center for Health Statistics), and approximately 1.5 million men becoming new dads every year, it’s more important than ever for fathers to realize that being a “good provider” is only part of the very central role they have in their children’s lives.